Mykolaiv City and One Works signs MoU for future masterplan

The memorandum of understanding between the city of Mykolaiv, represented by Deputy Mayor Vitali Lukov, and One Works was signed in our Milan Headquarters, sealing our commitment and continuous collaboration, together with local institutions and communities, to define the future masterplan for the reconstruction of one of the most important cities in Ukraine.

The framework in which the Memorandum of Understanding sits, with One Works already committing to developing the first phase pro bono, sees the fundamental participation of many partners and aims to define a replicable model for as many cities as possible.

The destruction that the war continues every day and, until the hostilities cease, enormous efforts will be required on the part of the Ukrainian Government for an extensive reconstruction plan. For this reason, despite the uncertainty of the conflict, in April 2022 the Ministry for the Development of Communities and Territories of the Republic of Ukraine drew up a draft of Recommendations aimed at organically guiding the reconstruction plans of cities and infrastructures compromised by the conflict.

The Ukrainian Government has thus requested the support of the UNECE (United Nations Economic Commission for Europe) for further development of the Recommendations. In response, UNECE initiated the "#UN4" project and established a Task Force composed of over sixteen UN agencies working in a coordinated manner to support the efforts of the Ukrainian Government in developing innovative approaches to the reconstruction of cities destroyed or damaged by the conflict. More information about #UN4Mykolaiv can be found here. 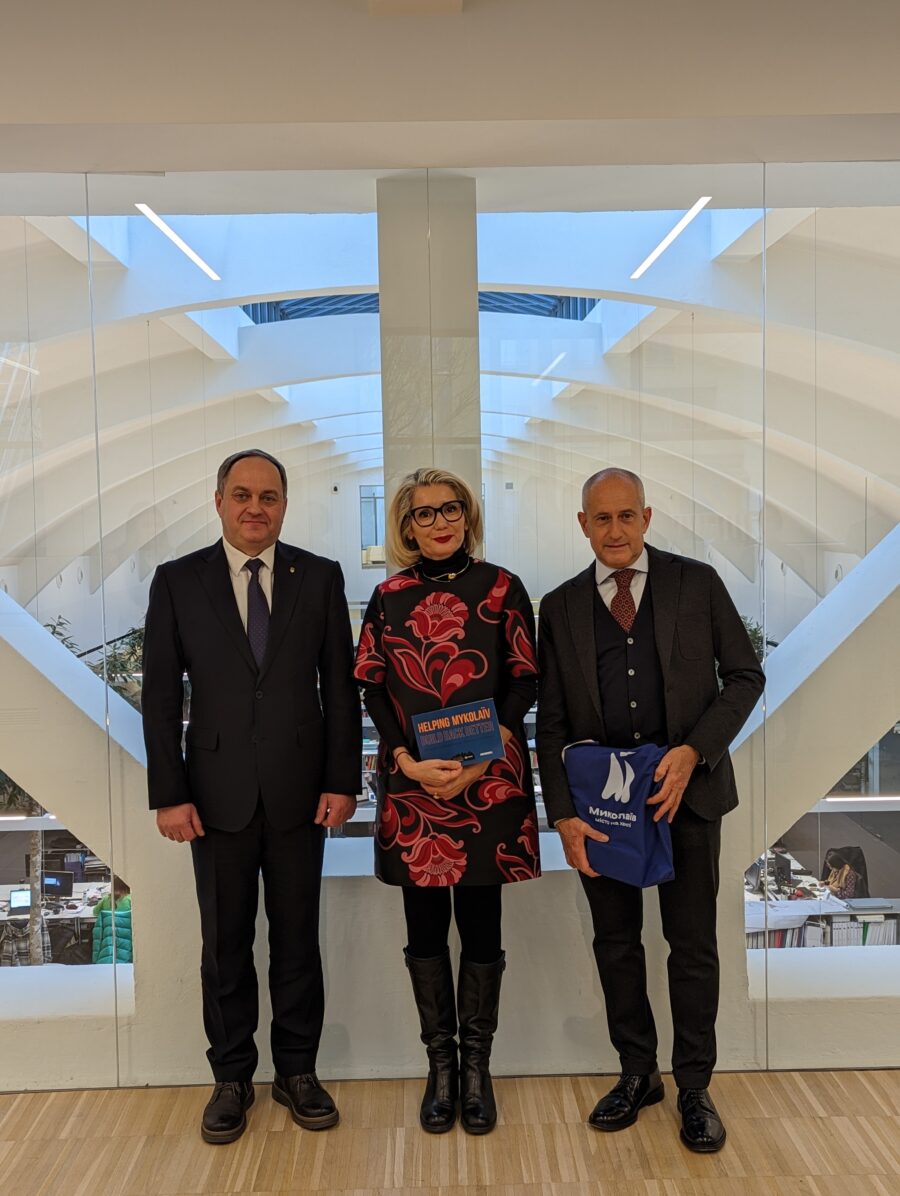 Vitaly Lukov, Deputy Mayor of Mykolaiv, said: "Today for the first time, we were able to meet the One Works team personally, I can say not only that I have found the high-profile professionals who have already shown themselves in these first months of collaboration, but also friendly faces, sincerely close to our people and determined to define the best reconstruction plan. A plan that can give Mykolaiv the momentum it deserves not only to return to being the city it was, but to become even more beautiful, large, and attractive to its inhabitants. By actively involving our citizens in this work that projects us into a post-war future we are giving a perspective, we are giving hope that, in turn, with their high level of response, they are giving us institutions. The priority is to end the war, and looking ahead will make us ready and quick for reconstruction." TBD resenting registration.

"For One Works, the involvement by UNECE and alongside Lord Norman Foster in the #UN4 project represents an honor and a great responsibility, which we immediately welcomed to support the citizens of Mykolaiv and the Ukrainian Government, contributing definitively and directly to the efforts of the international community in supporting a population so hard hit". explains Giulio De Carli, Founder and Managing Partner of One Works. "In addition to human proximity, we want to contribute with the best skills and knowledge in the definition of a masterplan that looks at an infrastructural and architectural reconstruction of the city based on equally solid social reconstruction. After the many online meetings with the mayor of Mykolaiv, Oleksandr Sienkevych, and Deputy Mayor, Vitaly Lukov, being able to host the latter in person in our headquarters was not only an honor but also very emotional. For some time, we have been discussing the first steps to be taken to respond to the most urgent short-term needs and support reconstruction efforts with a long-term vision, towards a better tomorrow, imagining a green and inclusive city that responds to the most urgent post-conflict needs, whilst encouraging a positive development perspective. A city that through innovation, sustainability, and new forms of participation, has solid foundations to face the challenges of the future".

Paola Deda, Director Forests, Land and Housing Division, UNECE, adds: "As UNECE in this important initiative launched to contribute to the reconstruction design of Ukraine, we play the role of matchmaking by bringing together the best professionals in the world of architecture, planning and engineering and cities. Today with the Foster Foundation and One Works who have given the willingness to offer their contribution we are validating a model respectively on Kharkiv and Mykolaiv. A model that we hope many other important studios in the world will want to marry soon to "adopt" other important cities that need to be able to look ahead with hope. We start from the cities because as UNECE we are convinced - as we have long learned thanks to our Forum of Majors - that these are the place where the real needs emerge more clearly, the faster the projects can be realized and with greater security and precision it is possible to keep track of the correct use of resources and the correct realization of the works".

One Works is working closely with the UNECE task force, the Norman Foster Foundation, and the Mykolaiv authorities on five thematic macro-areas forming the basis for analysis and identification of the strategies that will guide the drafting of the new urban masterplan: transport and connecting infrastructures, green and water system, innovations, social housing, industrial and production development.

Enhancing its network of relationships developed in 15 years of international activity, One Works is involving strong partners and the most advanced skills that Italy can express (For example: ExSuf- UN Geneva Charter Centre of Excellence, the Department of Urban Planning of the Politecnico di Milano, Liuc – University of Castellanza), and together with UNECE, the European Economic Forum and the World Bank is engaged in an intense dialogue with institutional and private donors called to support the #UN4 initiative.