Refurbishment and renovation of an iconic part of Milan

The Galleria Manzoni, designed by Alziro Bergonzo and built in the late 1940's, during the golden era was a hub of primary importance within the city's film and theatre quarter. The multiple civic values, which the building came to symbolize, recognized in the cultural excellence of its programming, the innovative technology of its equipment, the distinguishability of its shopping gallery, and its recognition as the city's center elite social circle.

In recent years, however, the original urban function has become obsolete; it no longer has a leading role. The new Galleria Manzoni, therefore, aims to recover a pro- active part within the urban fabric side by side with its present day neighbors, such as the Palazzo Armani, Swiss Institute and Piazza della Scala.

Parallel to the logical and necessary restoration of such a legacy, concerning both material and cultural conservation, there is the urgent need to reestablish the functionality of the Galleria Manzoni facilities. There are two potentially dangerous and opposite consequences: on the one hand the 'museumization' of an urban treasure that should still play a role in 21st-century Milan and the far more concrete risk, on the other hand, of its decay and irremediable loss. The design proposal, submitted by One Works, is both respectful of the existing materials and structures and revolutionary in completely redefining the spatial hierarchies of the building. 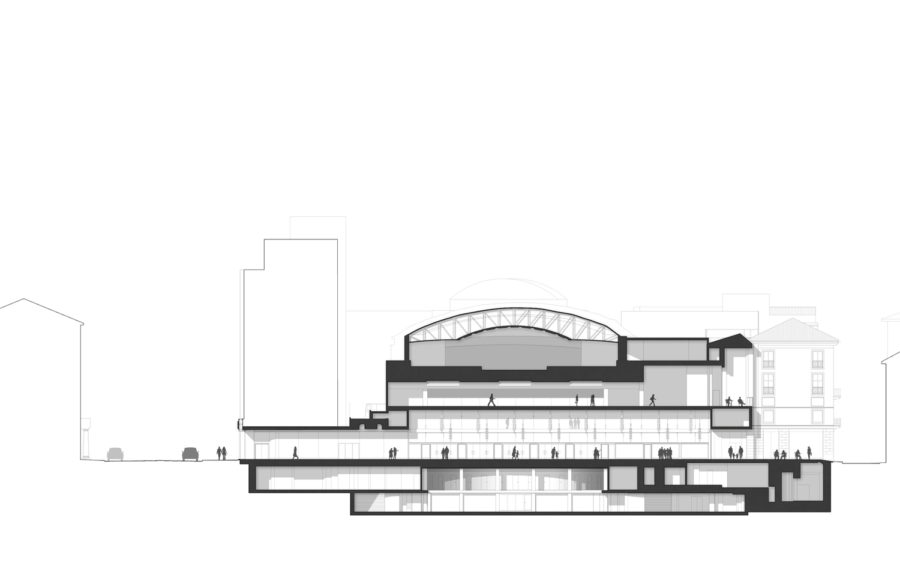 The Galleria Manzoni, built to host a cinema and theater, is an introverted organism: two halls of formidable dimensions are entirely contained within. They communicate with the outside world exclusively through the entrance/exit doors that conduct one to the atrium, then from there to the Galleria, and finally to the public street. Identified in the design process, however, lies the possibility to invert this configuration in terms of both perception and use, with only a few adjustments. Through the restoration process, the Galleria Teatro Manzoni becomes an openly inclusive space, having a continuous relationship with the dynamics of the surrounding city.

The project foresees a change in the spatial experience beginning with the Galleria's access points. The difficulty in this case consists in ensuring maximum visibility to the building along the passageways facing it, whose street front sections restrict the view of the inner facade. The main glass door, painted black on the backside (with details in tones of brass, harmonized with the interior fixtures), upon which the name is to be clearly read captivates passerbys on Via Manzoni. The door also incorporates a multifunctional screen device for theater patrons. 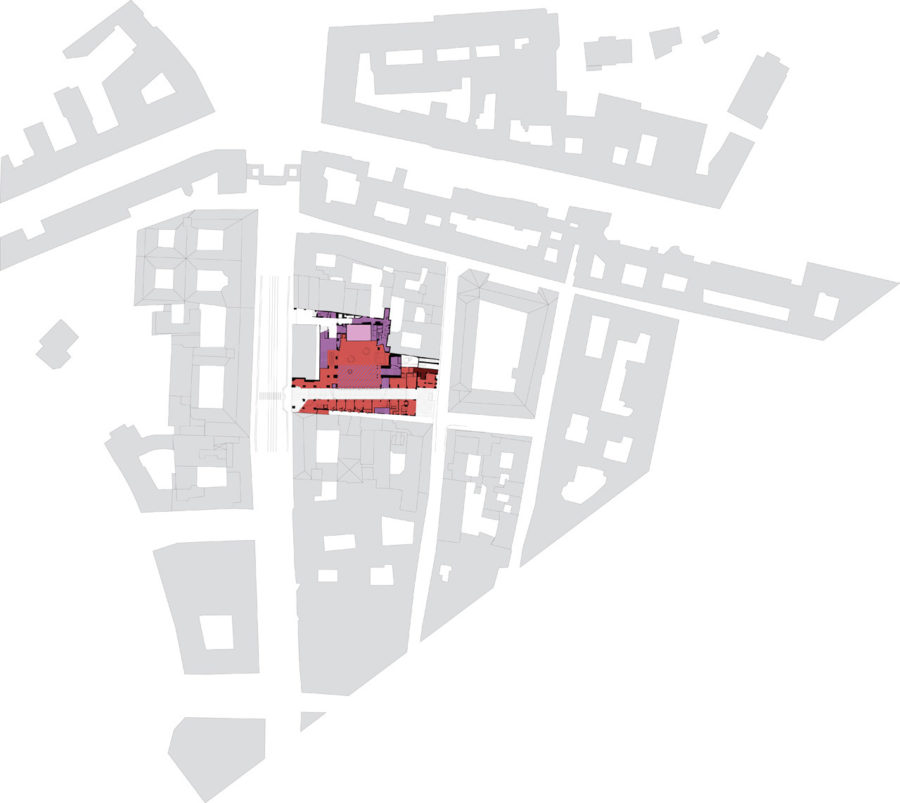 Visitors arriving from the opposite side, along Via Borgospesso, encounter the building situated on a small plaza, Largo Montagna, which conceived as a public sitting room. Two important functions configure the small piazza as a natural link with this quiet neighborhood street. Firstly the presence of new restaurants greatly needed in the fashion district. Secondly, the renewed pedestrian continuity with the Galleria obtained visually through the elongation of the storefront windows. The new openings on to the plaza transforms the relationships between the open and closed spaces, generating direct visual connection between the public space of the Galleria and the once invisible interior.

Along the Galleria, the atrium retains its commercial aspect, inviting visitors to transit through the main gallery, obtained by the cinema hall's reconversion. One also accesses the theater from this same atrium, assuring complete continuity and diverse encounters with the new spatial system while maintaining its current conformation.

On the second floor, an exhibition space, situated inside the volume of the former cinema, will explicitly recount the history of Milanese architecture, thereby restituting back to the public a piece of its forgotten heritage. Redistributed and readjusted functions simply respond to the needs of the new urban population. In keeping with this same principle of continuity, the project addresses the Milanese citizens, as well as the vast number of visitors who animate its center.

The project offers to all an extraordinary example of decorative arts in its entirety, down to the last detail, with the conviction that it can still stand as an emblem of Italian luxury, excellence, and unique taste embodied by the Galleria Teatro Manzoni.