Design of the new public plaza and outdoor retail offer at the centre of CityLife - strongly characterised by the accompanying towers and part of a wider, iconic urban development project.

CityLife is one of the largest urban regeneration projects in the recent history of Milan, based on an international competition won by a consortium that includes architects Zaha Hadid, Arata Isozaki and Daniel Libeskind as designers. After having participated with the team headed by Gustafson Porter for the site’s urban park, One Works was later asked to design the Piazza Tre Torri. 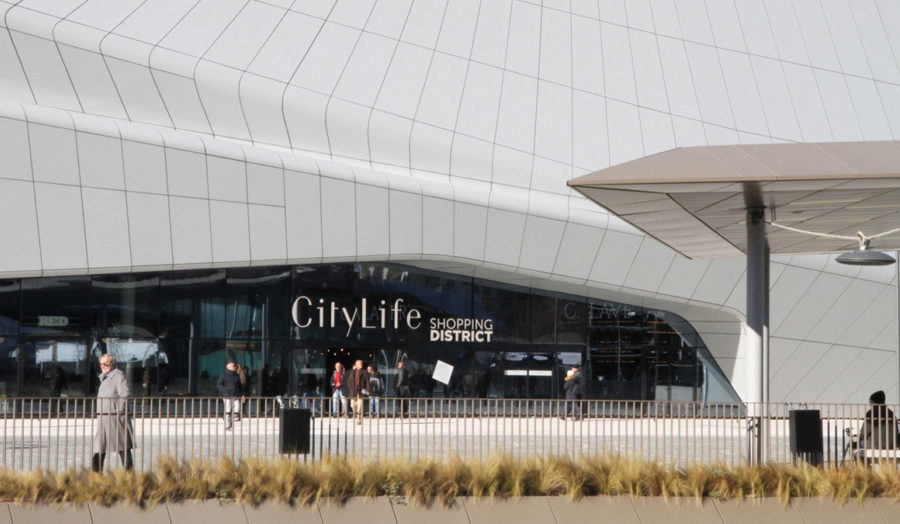 Defined by public spaces and retail

The commission included addressing the strategic design of a new retail plaza to serve as the entrance to the new metro line, whilst effectively integrating the project’s strong urban character with the local metropolitan area. The complex project also included the strategic retail planning of 40,000sqm of GLA and a new plaza design for high street shopping facing the public spaces.

The revision of the plaza’s layout stems from variations in its functional program, or rather of its spatial distribution, and the desire to create a single public place made up of two open spaces at different levels. Retail functions, strongly characterized in part by the fashion mall at the base of the Hadid tower, and the outdoor commercial activity distributed around the plaza and along the pathway towards Piazza VI Febbraio, permit the public square to open itself up to the city and the surrounding park. Hence, the project’s strong urban character integrates well into the metropolitan area.

The public plaza’s configuration highlights three important aspects. Firstly, the plaza links the park’s southern and northern parts. Secondly, it establishes an East-West relationship, which correlates Piazza VI Febbraio with the fashion mall and park to the west. Finally, the central Tre Torre Plaza is an urban fulcrum and integral part to the pathway system described. In addition, the horizontal movement flow network superimposes a vertical system, which links all three towers at both their access levels, and the two public reference levels of the entire project, with the metro station.

The strong spatial articulation is resolved through large openings that overlook the hypogea plaza, freeing the view of the three towers from below and allowing for a direct integration with the same. The lower level, defined by the ceiling design that turns up into the large apertures and partly onto the blind facades between the windows, reinforces once again the continuity of place between diverse levels.

The plazas’ overall size and structure along with the typology of the adjacent enclosed spaces determines the character given to specific parts of the open space system. In general, in this design phase, there has been a significant increase in green surface areas as a means to emphasize the spacial diversities.

Large trees planted in the plaza’s north and south areas are in continuity with the park. The shrubbery and ornamental grasses, which ornate the flowerbeds in front of the towers help to confer a certain intimacy to the private outdoor areas. On the western side of the plaza, groups of trees with circular flowerbeds, inserted into the pavement motif, anticipate the future connection with this end of the park. Finally, shrubs and colourful flowered borders, some of which will variate with the change of seasons frame all openings. 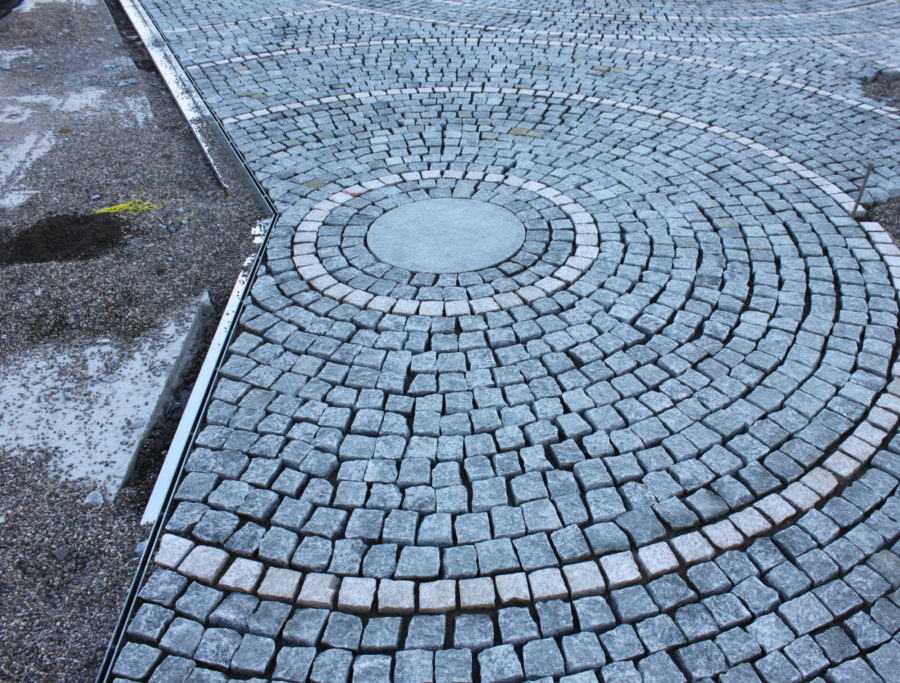 The plaza’s extensive size necessitated a characterizing canopy element that could emphasize not only the central role bestowed on the public place but at the same time offer the main pedestrian routes protection from the natural elements. The canopies introduce the human scale; they address the needs of the pedestrian.Their horizontal lines read in contrast with the verticality of the towers, whose reference is to the metropolitan scale and to the area’s trade fair origins.

The plaza’s illumination is based on the City’s traditional street lighting fixtures hang from cables strung between facing buildings. In this case, the electrical cables use the canopy’s structural supports as their starting point and run throughout the open space lighting both levels simultaneously.